“The drive mechanism for the 5035/5055 is very similar to the design of a traditional mechanical watch escapement.* The pulse motor drives a pallet fork which in turn moves a pallet wheel.* This wheel drives the second hand at a 1:1 ratio with one tick per second.* The hour and minute hands are driven off this pallet wheel.* The loud "tick" you hear every second are the pallets engaging the pallet wheel.* That is why the tick of the 5035/5055 has such a unique sound and is very much like the tick of a mechanical watch, though at one tick per second rather than the eight ticks per second of a 28,800 bph Rolex Perpetual movement. This drive mechanism also ensures the second hand steps around the dial smartly with zero backlash since the hand is effectively locked in place by the pallet fork in between each beat.”
Klikk for å utvide... 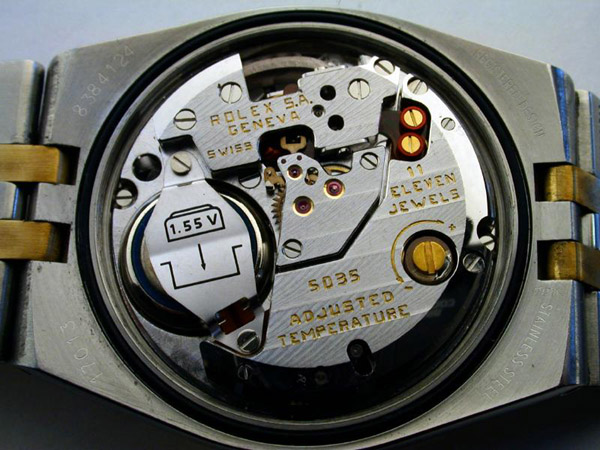 “Everything about the design and construction of the 5035/5055 module shows that Rolex intended this movement to be a "lifetime" movement, designed to be serviceable and serviced just like their mechanical movements. In fact, apart from the electronics and the pulse motor, the "mechanics" of the 5035 are the same as the 3035 automatic movement that was also introduced in 1977 and used in the Submariner and other Date/Datejust models for over a decade.”
Klikk for å utvide... 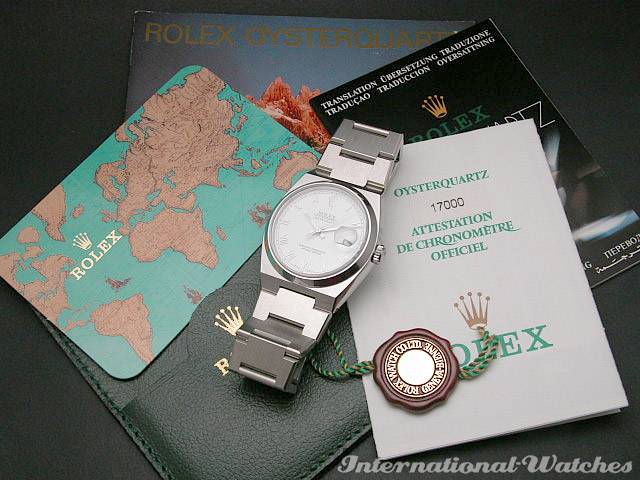 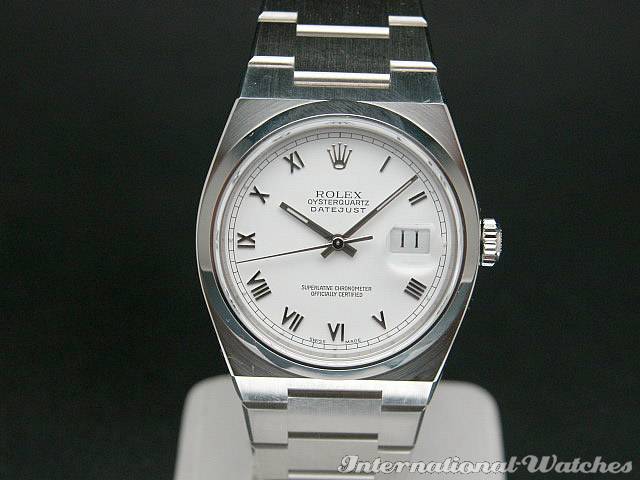 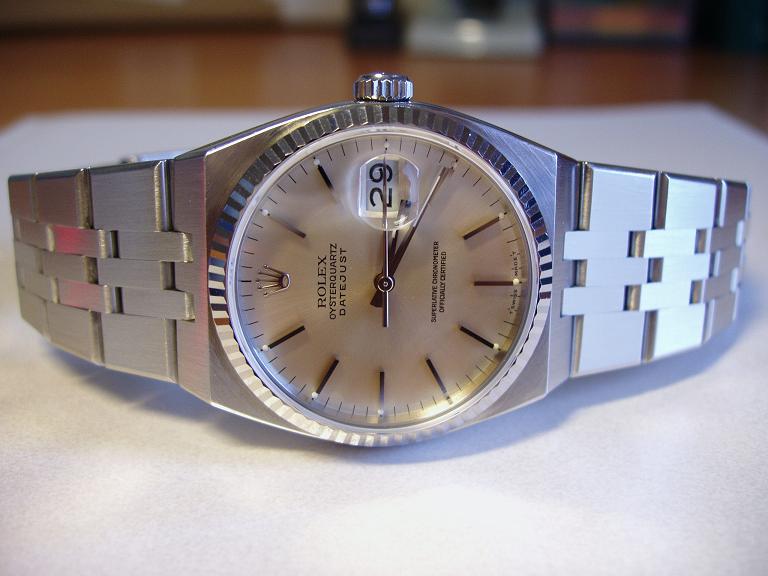 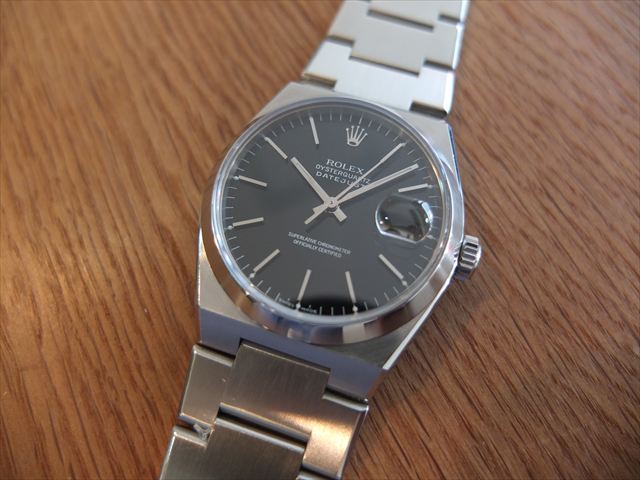 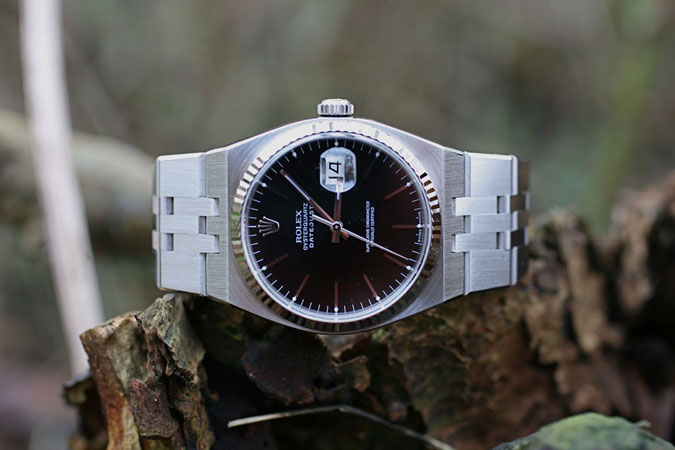 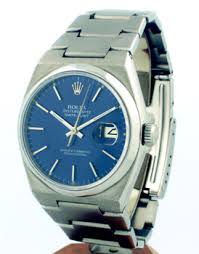 In 2004, an Oysterquartz watch was offered at auction by Antiquorum that looked like an ordinary 17014 stainless model with the white gold bezel. Upon closer examination, however, it was clear this watch was something unique and many wondered if it was a genuine Rolex. There was no reference number on the back of the watch where one would expect to see it engraved on a typical Oysterquartz. And the watch contained a heretofore unheard of 23 jewel quartz movement marked "5335" with a date function that employed a perpetual calendar mechanism that could be completely adjusted using the crown.

This mystery watch was never sold because it was pulled when Rolex told Antiquorum officials that it had been stolen from them. A civil lawsuit ensued in Switzerland between the owner of the watch and Rolex. Rolex lost this suit largely due to the testimony of former and current Rolex employees who testified that it was common practice for Rolex to dispose of prototype watches by giving them to employees. Also, the fact that Rolex had never reported the watch to the police as stolen didn't help their case. The publicity surrounding the trial served to confirm the authenticity and provenance of this watch and ensure its value as a collector's piece when it is eventually offered for sale again. 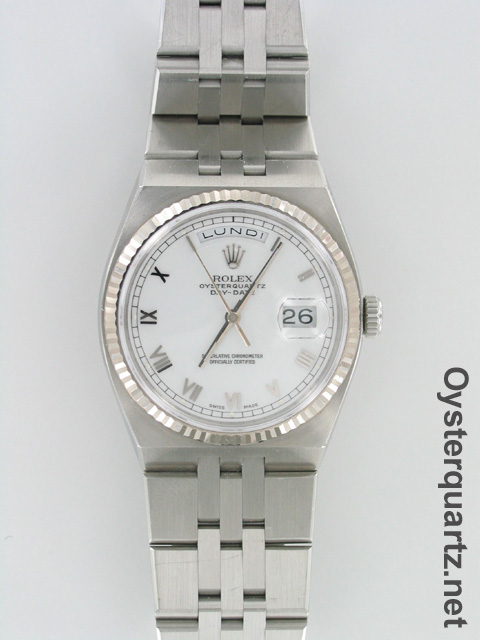 Thanks to a former Rolex insider (who no longer works for Rolex), I am able to confirm not only the existence of the Oysterquartz Perpetual Calendar, but give some details about this watch, which is without doubt the rarest Oysterquartz ever produced by Rolex.

All prototypes were encased in 17014 SS cases with white gold bezels.

No external reference numbers were engraved on the cases.

The movement used in the Datejust model was designated the 5335 and had 23 jewels.

The movement used in the Day-Date model was designated the 5355 and had 23 jewels.

The movement is silent, with no audible tic (a marked difference from the original Oysterquartz).

The perpetual calendar function of this watch was patented by Rolex: Swiss Patent number CH 672 222 G A3.

Here is a photo of the 5335 movement used in the Oysterquartz Perpetual Calendar. Note the lack of a battery compartment. Also note the Rolex coronet on the gold battery contact. 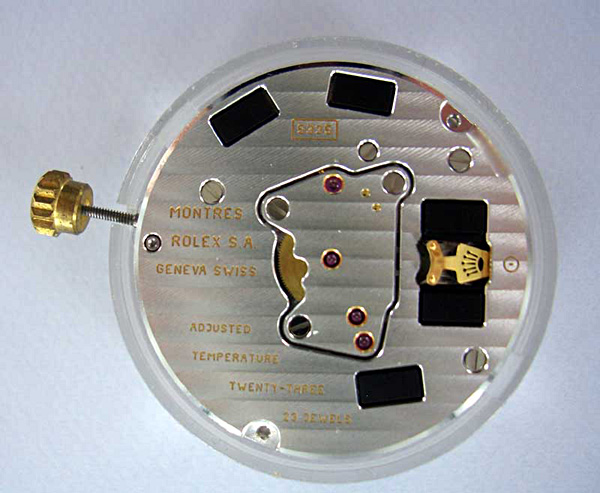 Here are a few of my observations about the 5335. These are my opinions only and have not be confirmed by the source of the photos or the above information.

The Oysterquartz Perpetual Calendar was probably scheduled for release sometime around 2000 as the Next Generation Oysterquartz, with the 5335 and 5355 movements replacing the 5035 and 5055.

The above surmise is based on the fact that the 5335 movement pictured above appears to me to be a production ready piece that is an entirely new design rather than a mere re-working of the 5035 to add the perpetual calendar function. Note the enclosed drivetrain and no external rate trimmer.

Because there is no recessed battery compartment, this movement probably uses a large 3.3v lithium battery that mounts to the back of the movement (similar to the ones used on some Breitling SuperQuartz models.) Such a battery would be good for 10-year replacement intervals.

The confirmed existence of the Oysterquartz Perpetual Calendar does give some hope that Rolex may one day reintroduce the Oysterquartz line since they clearly have a modern, thermocompensated quartz movement ready for use.
Reaksjoner: Gulosten, trippelj og chronometer