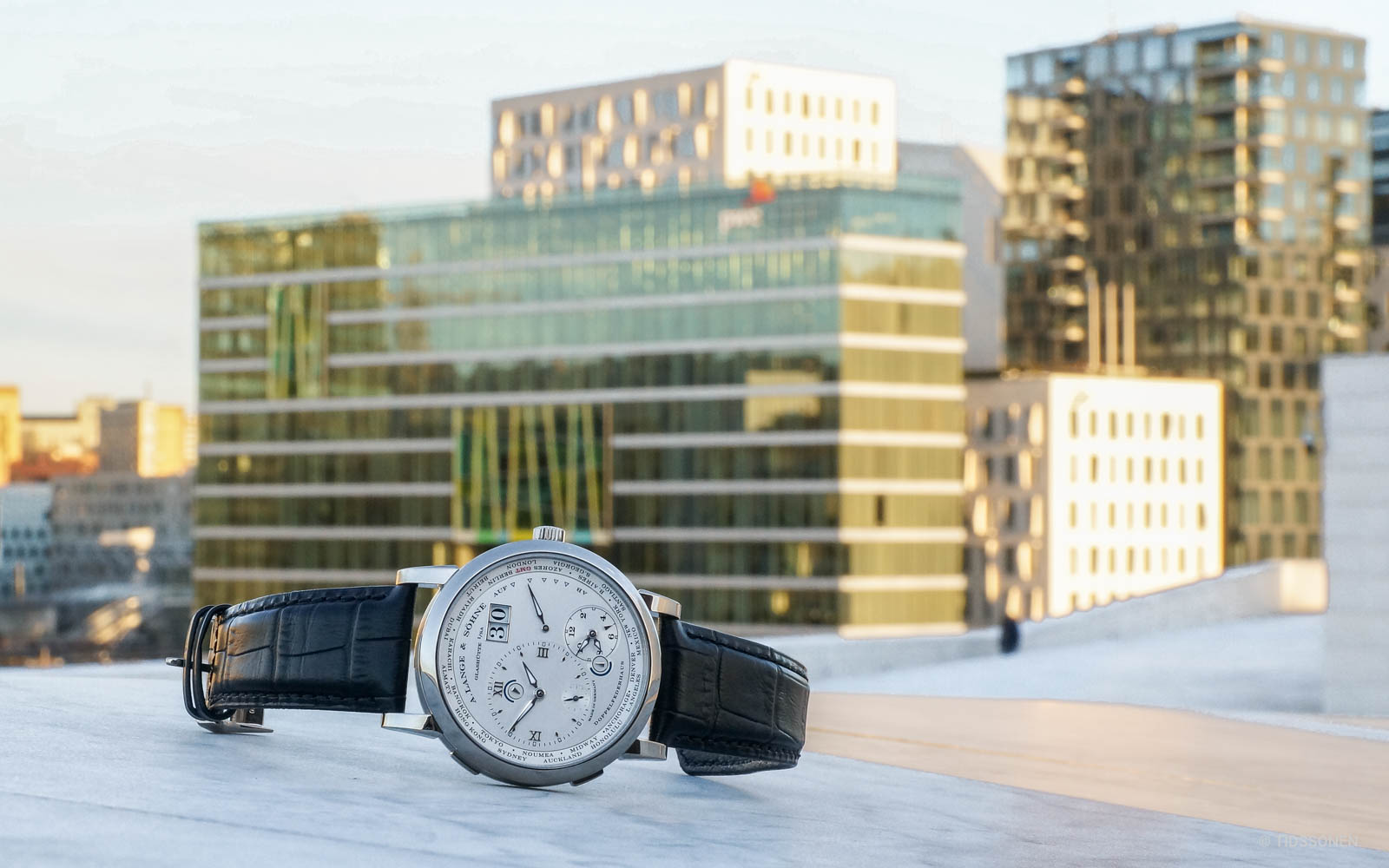 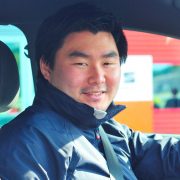 And it’s been interesting in a good way – traveling to a handful of remarkable European cities, reminding us of the culture and heritage of the old continent. Quite a fitting project for a watch that effortlessly displays two time zones, and even has a night/day indicator. A true traveller’s companion.

Guided by the hands of some of my esteemed colleagues from the watch media, the white gold Lange 1 Timezone began its adventure departing the Lange manufactory in Glashütte, heading for Łukasz and our friends at Chronos24.pl in Warsaw. Next up was Miguel Seabra and Espiral Do Tempo in beautiful Porto.

With a travel itinerary still consisting of Bexsonn in London, Designlovr in Hamburg, and Monochrome in The Hague, the journey is far from over yet.

But first – it’s time to represent the north!

Obtaining the status of being a truly independent country as late as 1905, Norway is by far the youngest sibling of the three Scandinavian countries. Being in a personal union with Denmark until 1814, then entering a similar union with Sweden until 1905, our cultural and historical heritage is significantly influenced by our neighbors. Still, over the last hundred years or so, Norwegians have gradually found their own unique identity and way of life. And there is no arguing that there is now a friendly rivalry going on between the three.

With a total population of just 5 million or so, about 620.000 people are living in our capital, Oslo. Being effectively the largest city in Norway, Oslo is a culturally diverse, modern and vibrant place to be. Like a lot European cities, the Norwegian capital is a city of contrasts, having a handful of distinctly different areas with unique atmospheres and exciting things to offer. Having lived in Oslo for several years while attending college and university, it’s also one of those places I feel a strong personal connection to.

Since the mid 80’s, Aker Brygge and the surrounding areas, have been known for being Norway’s financial district, and one of the most expensive residential areas in the world. Prior to its transformation, the area contained the shipyards and industrial buildings of Aker Mekaniske Verksted (now Aker ASA).

There is of course a lot more going on than just business at Aker Brygge, and the place is a popular location for both shopping, dining and nightlife. Especially in the summer time, the place is usually packed with tourists and locals alike, enjoying the sun and the oceanview. Traveling to Oslo to experience our National Day on May 17th? Aker Brygge is definitely the place to be. 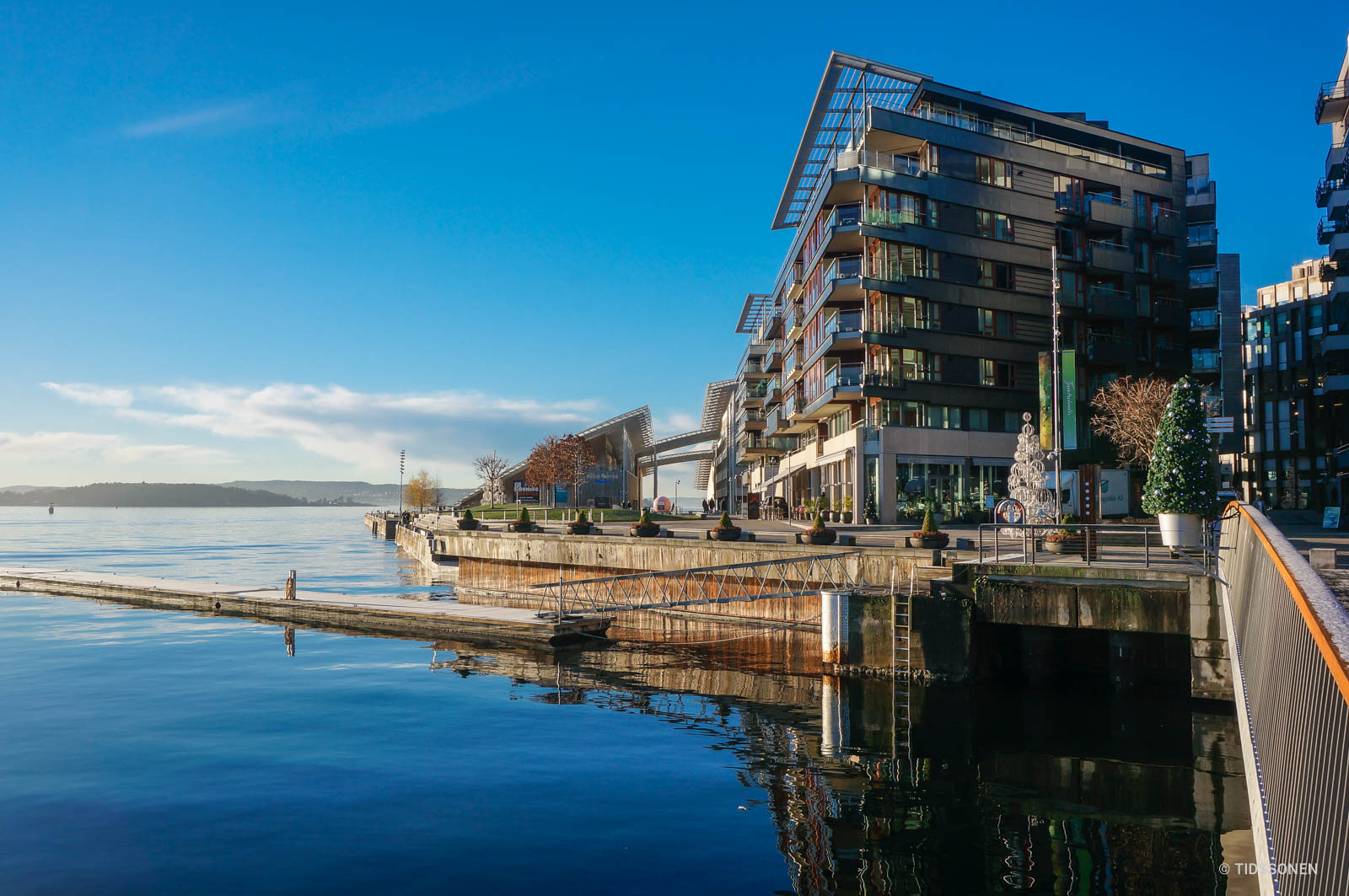 Connected to the southern end of Aker Brygge, is the Tjuvholmen peninsula. Tjuvholmen is an even newer area than Aker Brygge, sharing the characteristics of being a balanced mix of commercial and residential buildings, restaurants, bars and shopping. 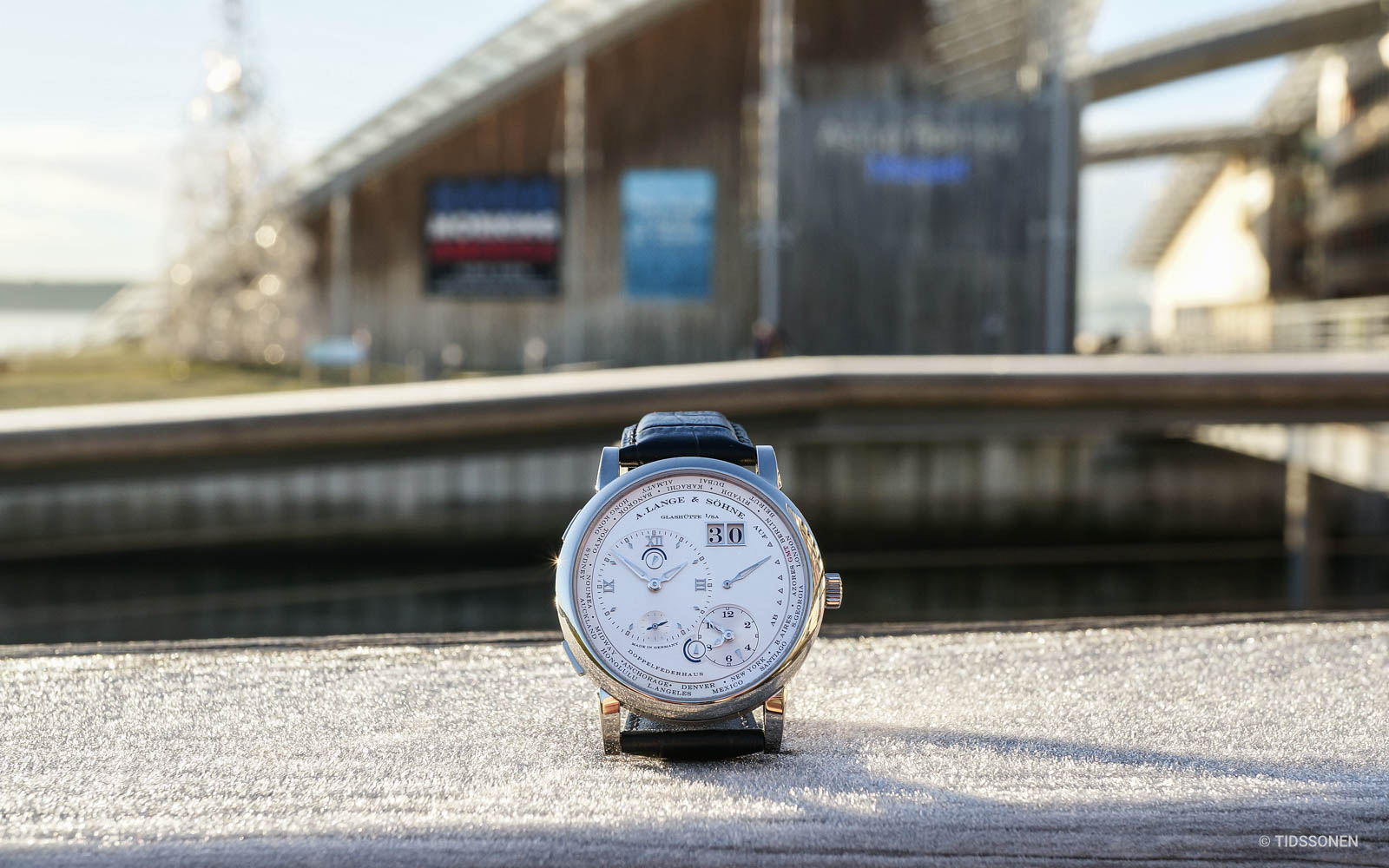 Tjuvholmen is also the home of the architectually beautiful Astrup Fearnley Museum of Modern Art, designed by the renowned architect Renzo Piano. The museum was founded in 1993 by the descendants of the Norwegian Fearnley shipping family, and moved to its new location on Tjuvholmen in 2012. 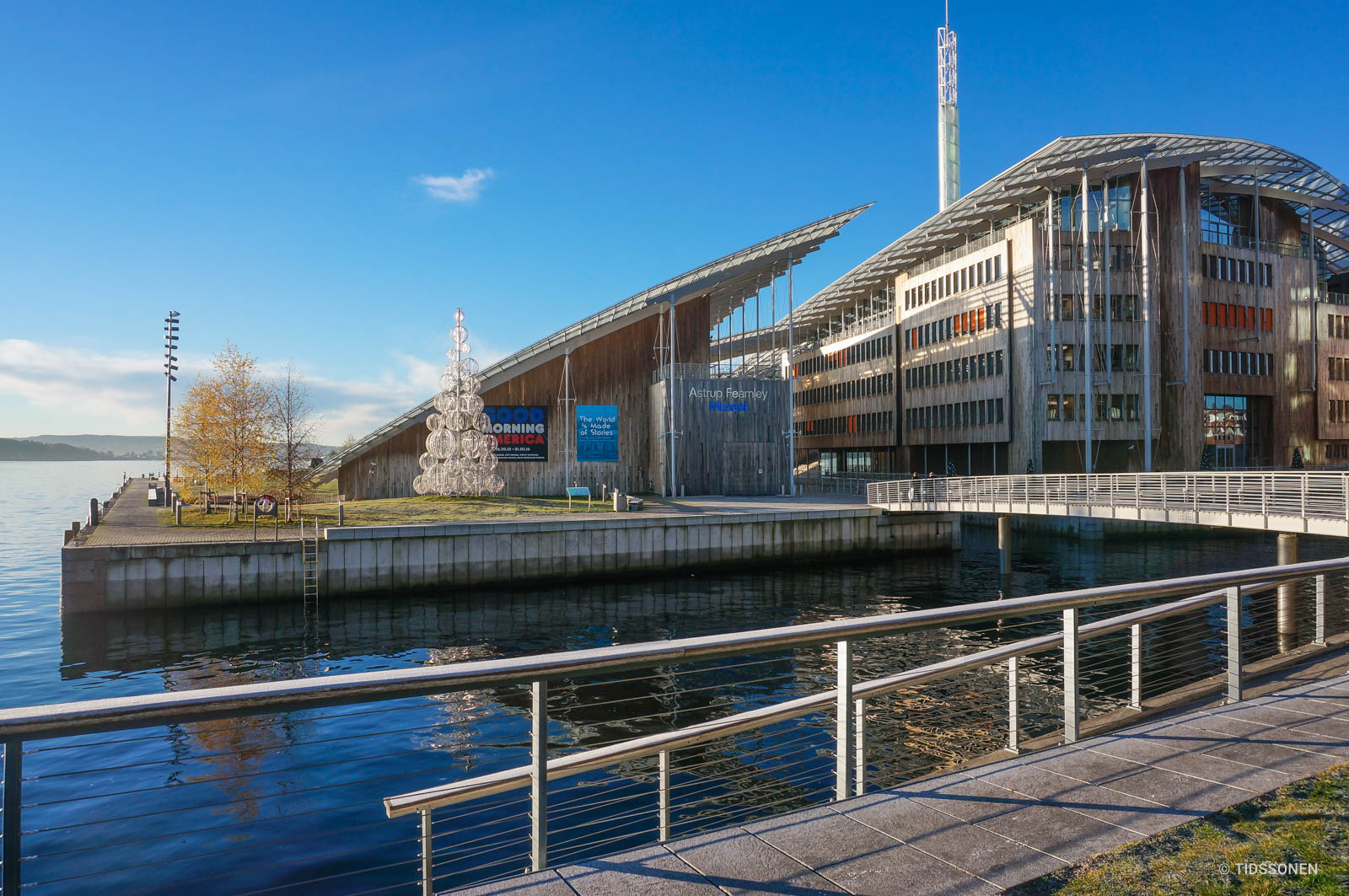 Walking towards Oslo’s main street, means walking past the Nobel Peace Center («Nobel’s fredssenter»), a museum and showcase for the Nobel Peace Prize and the ideals it represents. The center is open every day to the public, and a popular tourist attraction. Especially so around the time of the awards ceremony that takes place every year on December 10th, the day of Alfred Nobel’s passing. 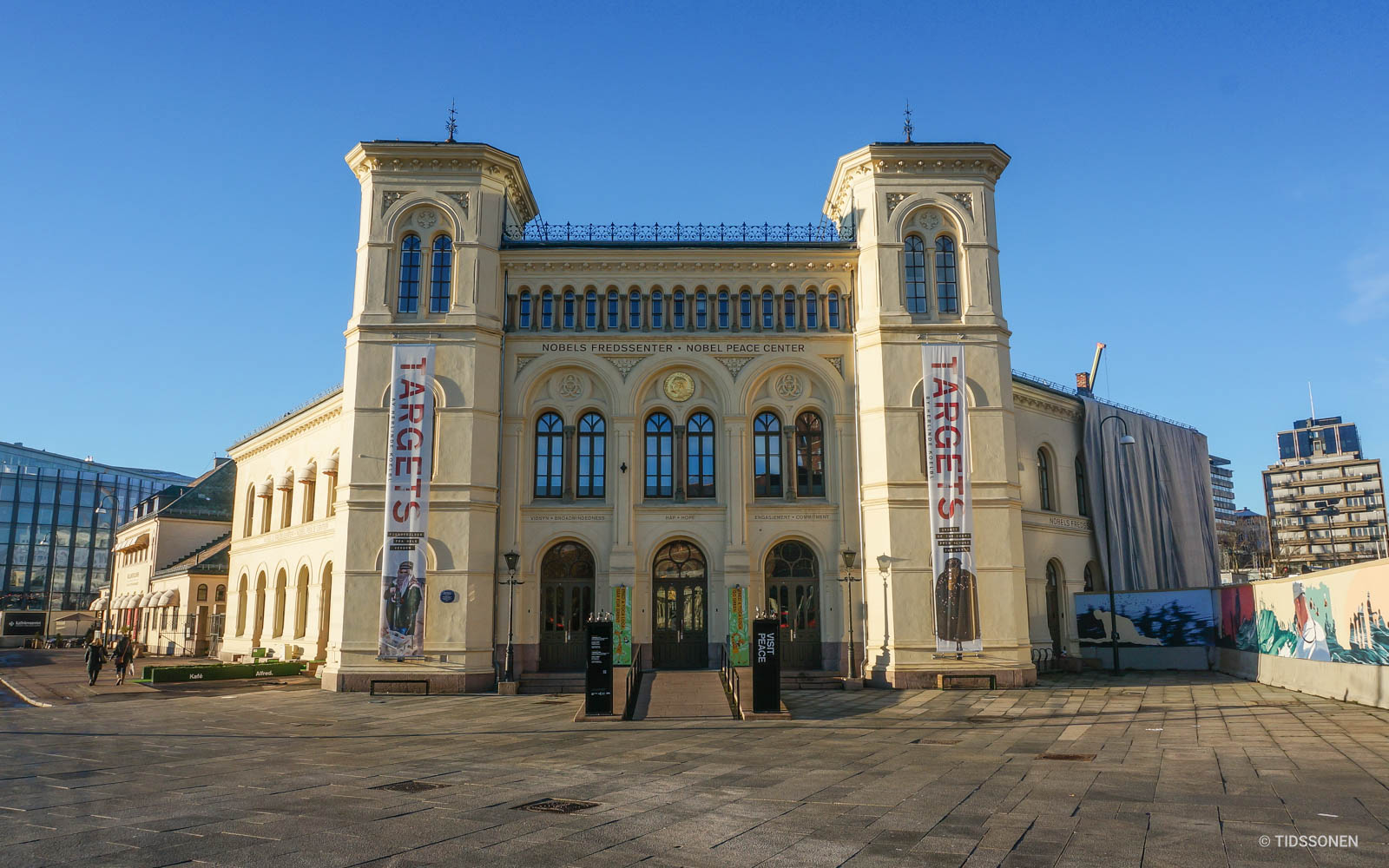 Why in Oslo you might ask? Alfred Nobel was indeed a Swede, but in line with his will, the Nobel Peace Prize recipient is selected by the Norwegian Nobel Committee, with the awards ceremony taking place in Oslo City Hall.

Oslo City Hall, with its functionalist architecture, is quite a remarkable building by itself. It’s easily one of the capital’s most famous buildings, being named Oslo’s «Structure of the Century» back in 2005.

The National Theatre («Nationaltheatret») is an important Norwegian cultural institution, opening in 1899 with Bjørn Bjørnson (son of Norwegian writer and Nobel laureate Bjørnstjerne Bjørnson) as its first director. The National Theatre is by many considered to be the home of the plays of influential writer Henrik Ibsen, who was also a strong proponent of building the theatre back in the late 1800’s. 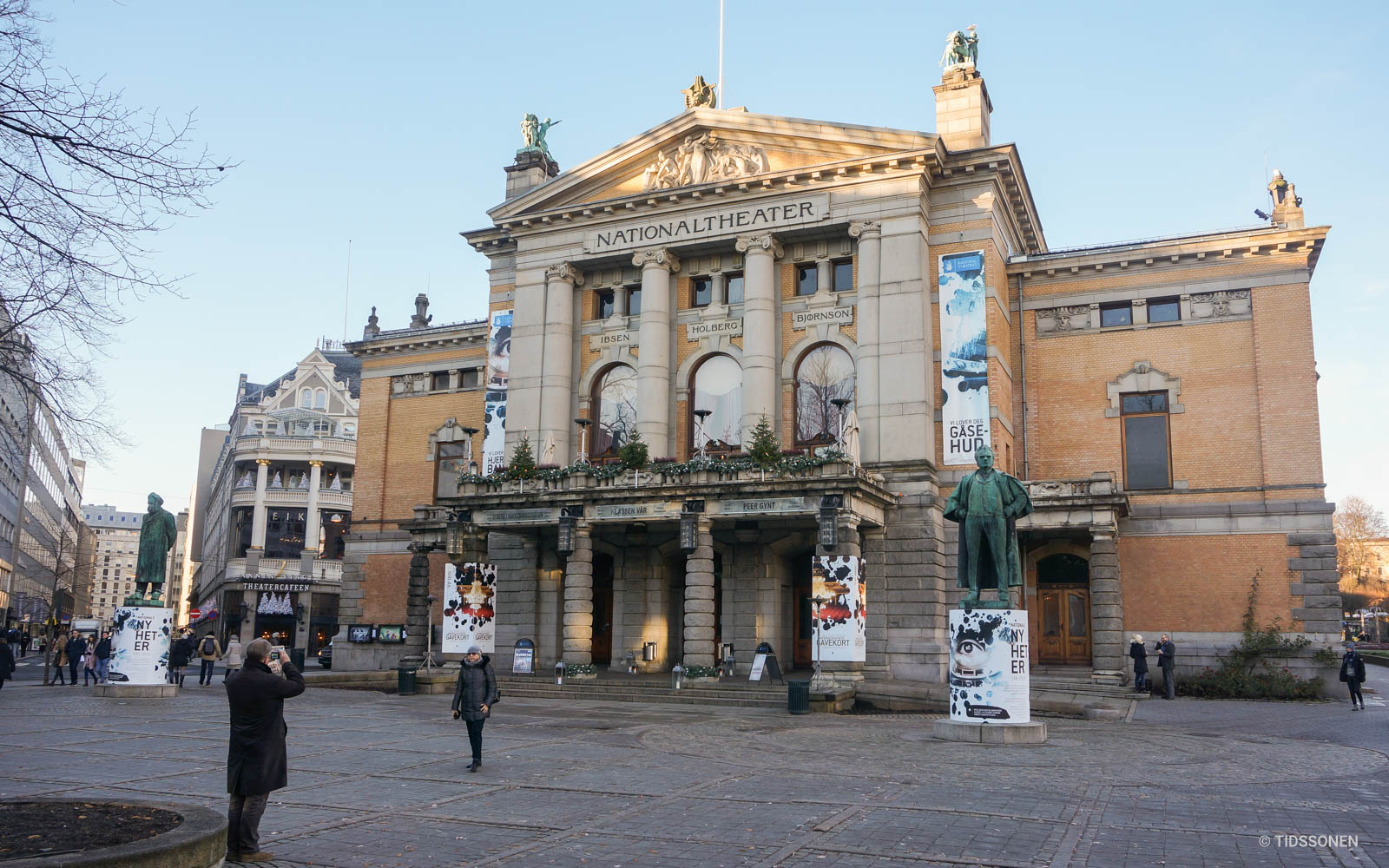 A stone’s throw away of the National Theatre, is yet another historically significant building – the old University of Oslo («Universitetet i Oslo»).

The University of Oslo is the oldest and largest university in Norway, established in 1811 and modelled after the University of Copenhagen and University of Berlin. It was intially named after King Frederick VI of Denmark (we used to be in union with Denmark, remember!), but received its current name in 1939. The university’s Domus Media building was the home of the Nobel Peace Prize ceremony from 1957 to 1989. Since 2003, the prestigious annual Abel Prize in mathematics has been awarded in the same building. 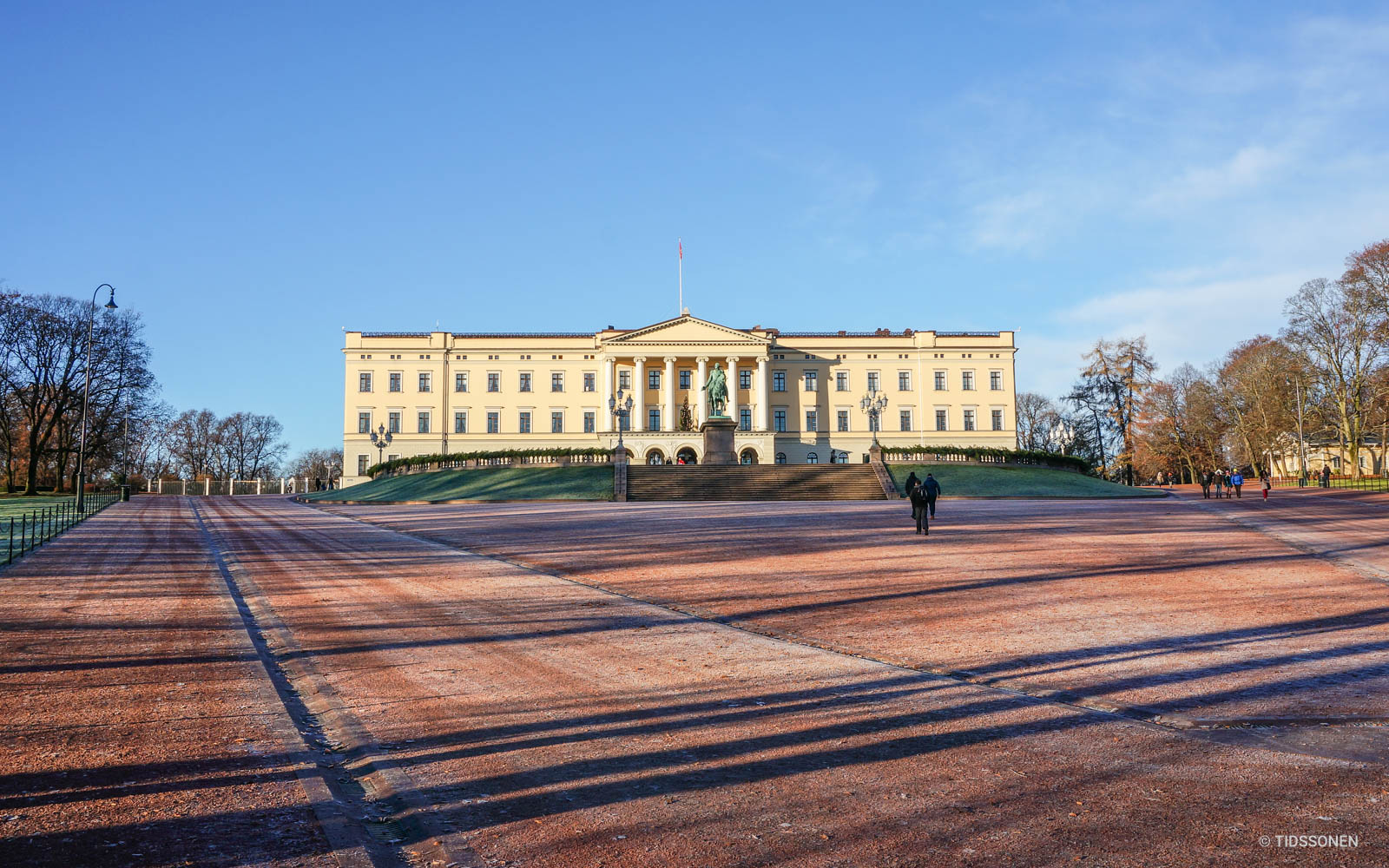 Situated at the top end of Karl Johans gate, is the Norwegian Royal Palace («De kongelige slott»), completed in 1849 as the residence of King Charles III John of Norway (Charles XIV John of Sweden). The palace is the official residence of the Norwegian monarch. 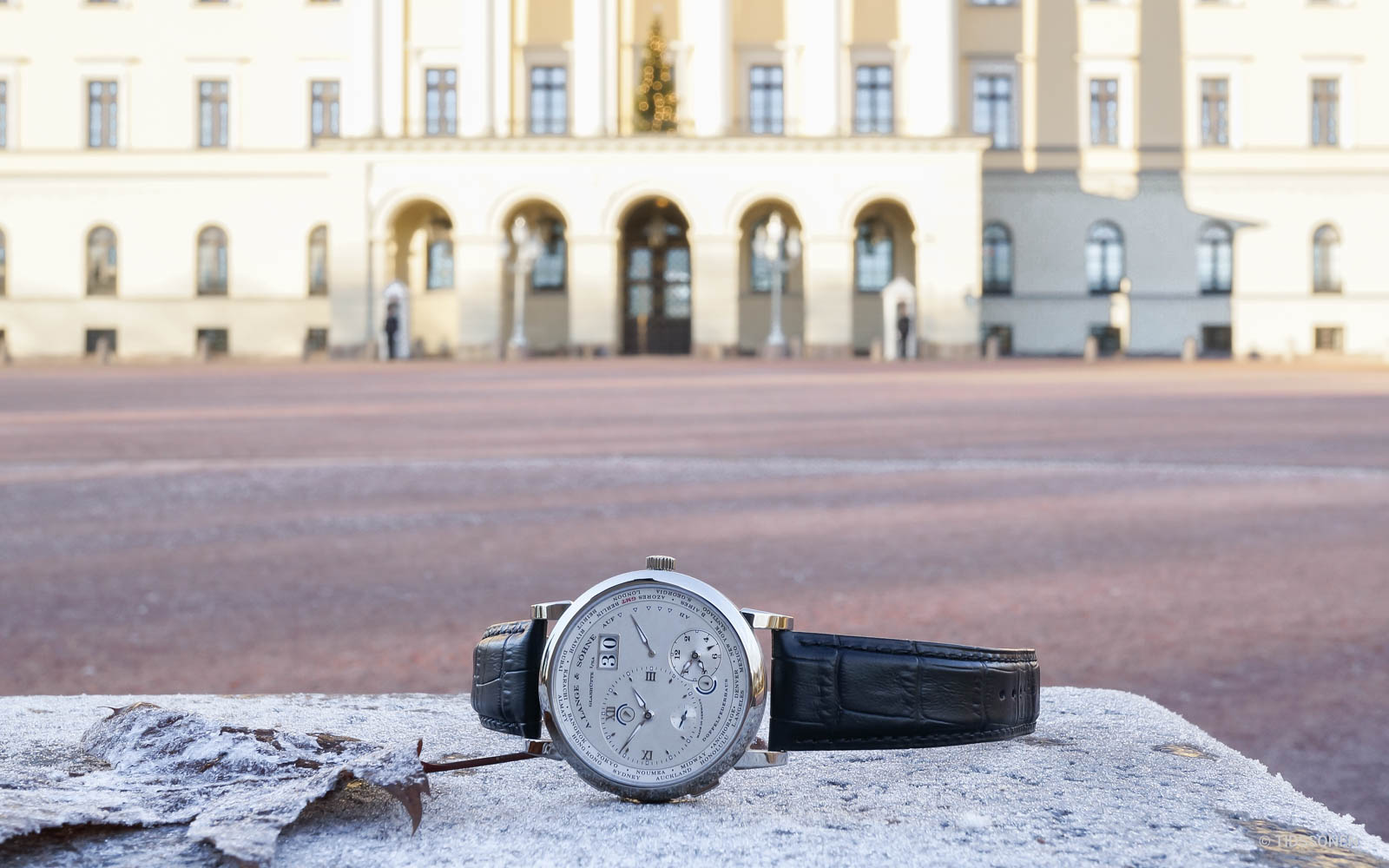 The Royal Palace is also an excellent spot for looking down on center of Oslo, with Karl Johans gate stretching all the way down to Oslo Central Station. 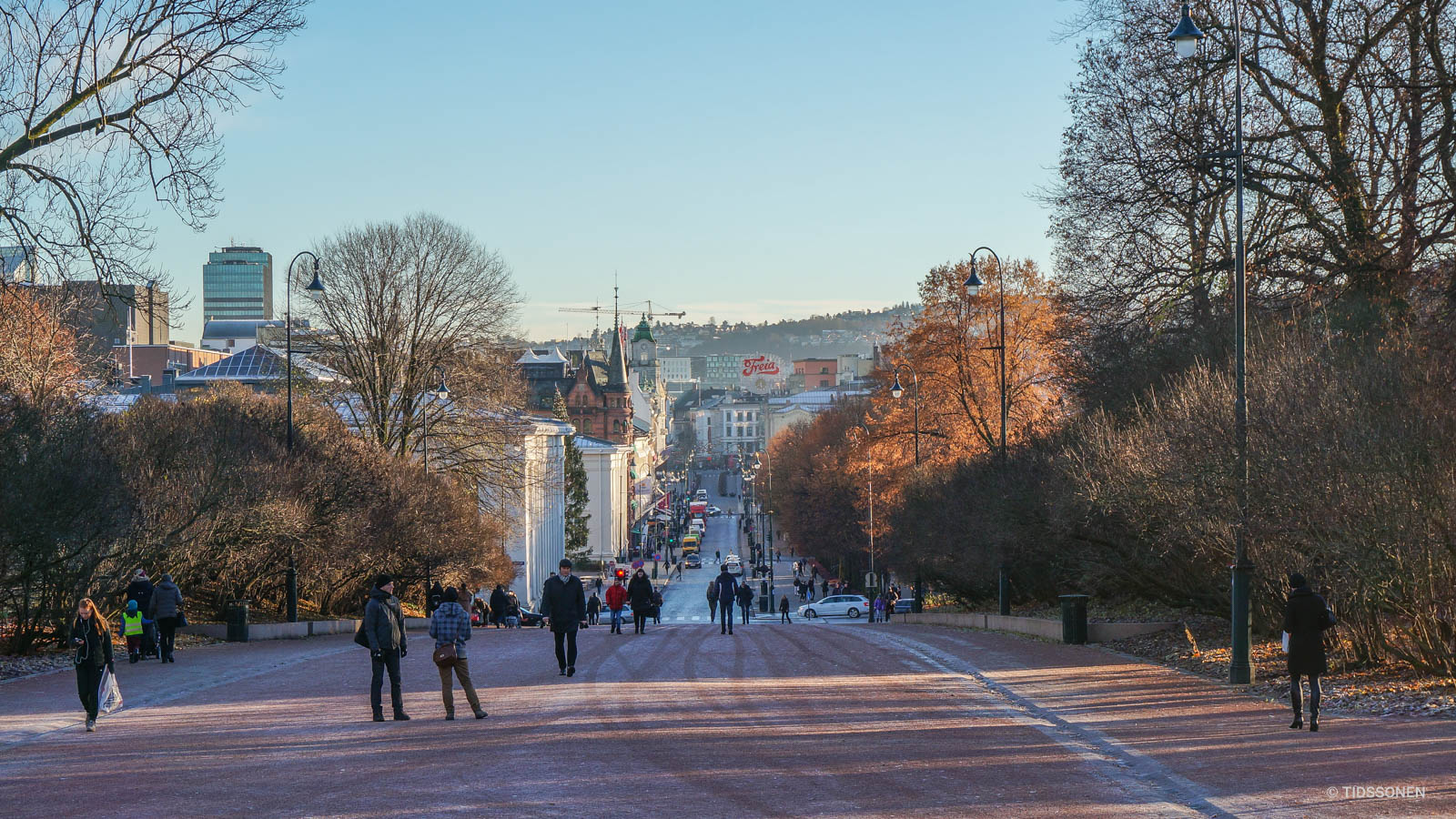 The Frogner Park is about a 30 minute walk from the Royal Palace, located in the attractive borough of Frogner on the West End of Oslo. While the name might suggest it’s «just another park», the 450,000 m² Frogner Park is the home of the Vigeland Installation (sometimes wrongly referred to as the «Vigeland Sculpture Park»). 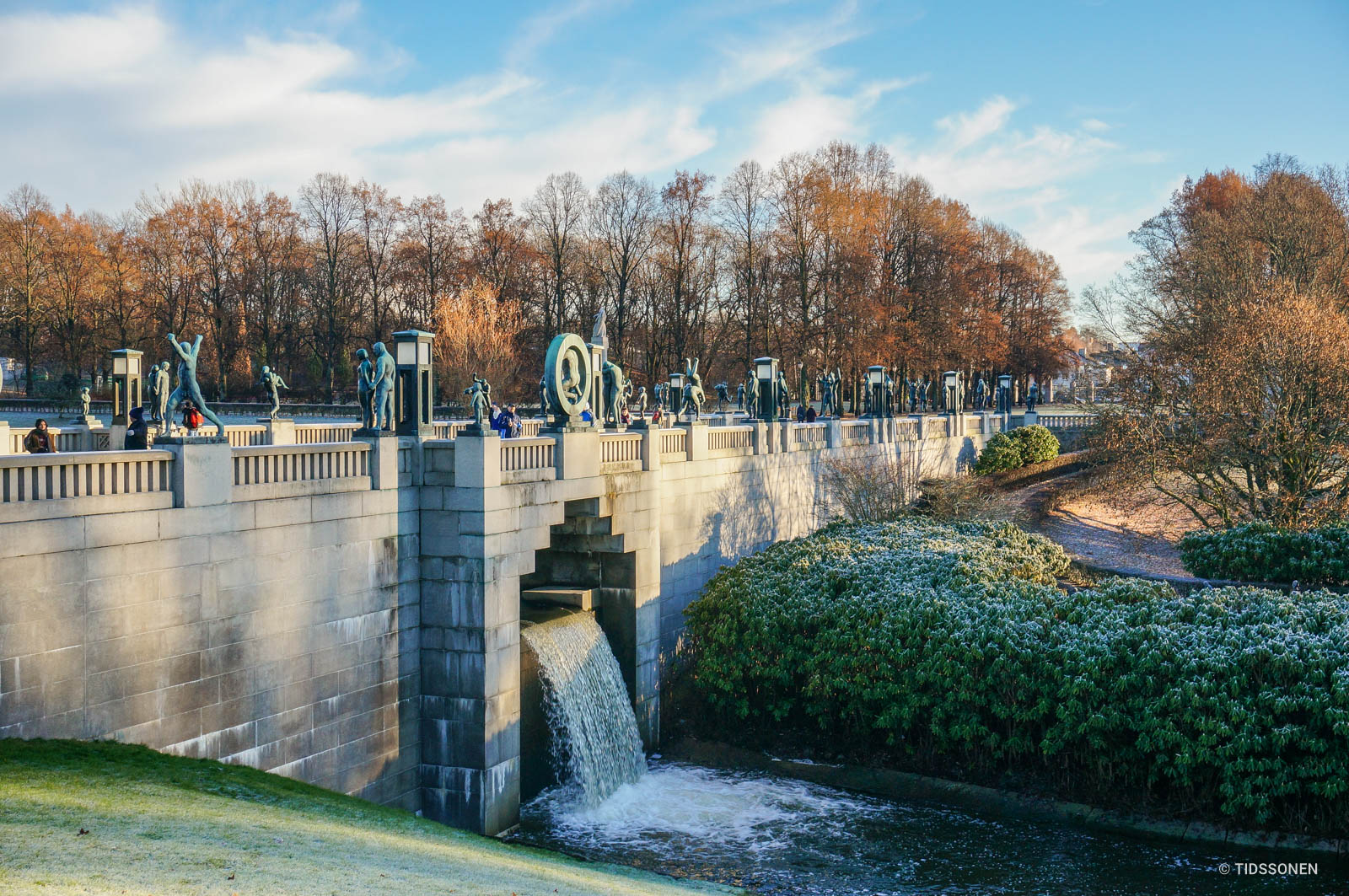 This world famous «sculpture park within a park», was created by Norwegian sculptor Gustav Vigeland between the 1920s and 1943, and is the world’s largest sculpture park created by one single artist. The bridge area was the first part of the installation being opened to the public, back in 1940.

The Vigeland installation in the Frogner Park, covers 450,000 m², and features 212 sculptures in total. The middle section countains the bronze Fountain («Fontenen»), which was originally designed to be placed in front of the Norwegian parliament building downtown Oslo. 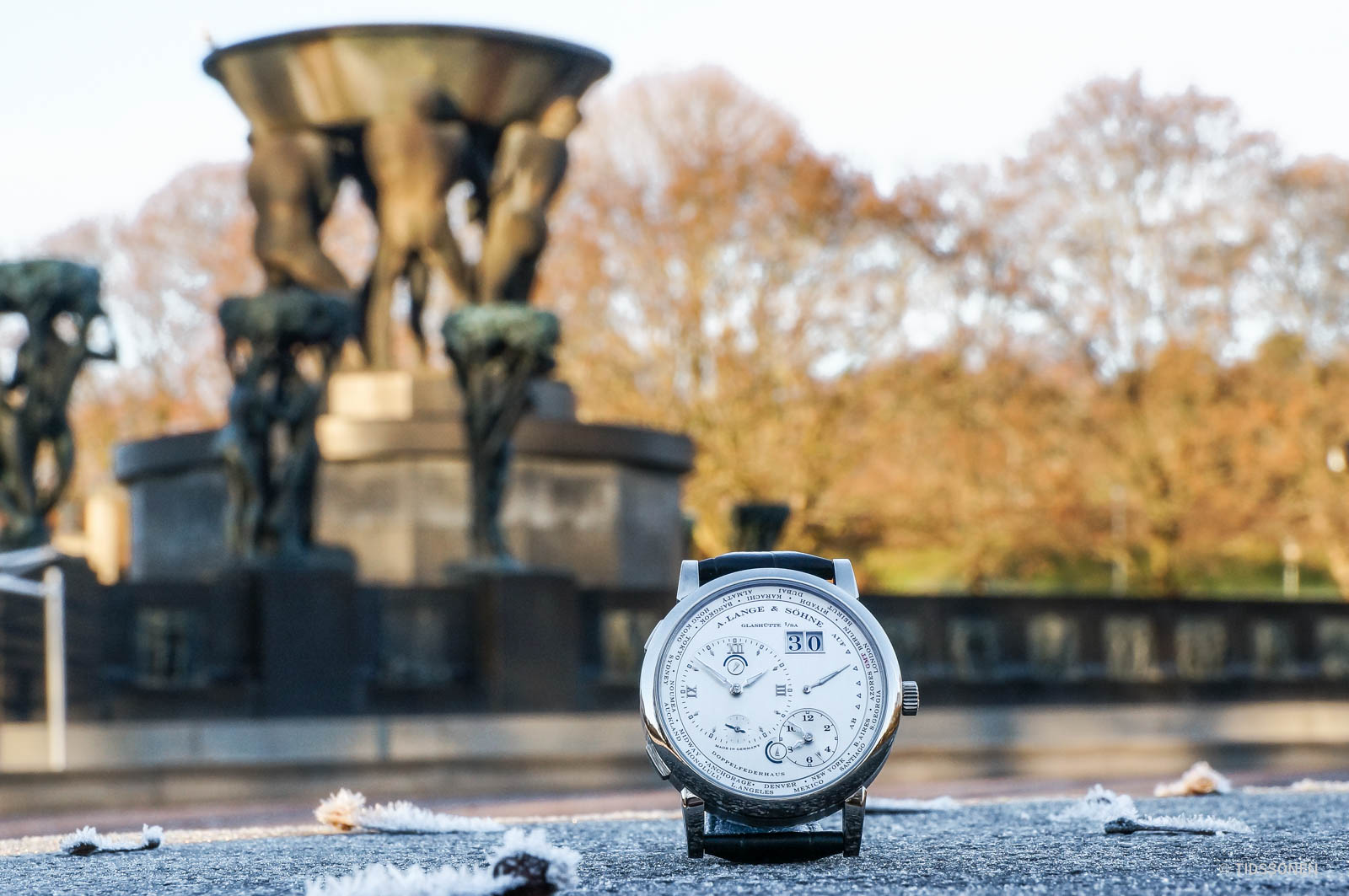 Walking further into the park, the sculptures change from patinated bronze to rock solid granite. The overall theme of the Vigeland installation is the human condition, and the Monolith Plateau north in the park is perhaps the most vigorous expression of this theme.

Standing 14.12 meters tall, the Monolith is composed of 121 human figures, and sculptured from one massive solid block of granite over a period of 14 years. A true marriage of art and traditional craftmanship – in spirit, not that different from what is going on every day at the Lange manufactory in Glashütte.

The Frogner Park is definitely one of the most popular must-see places in Oslo, but the same can also be said about the Oslo Opera House. Situated in the up-and-coming Bjørvika area in downtown Oslo, the Oslo Opera House is one the capital’s most striking landmark buildings. 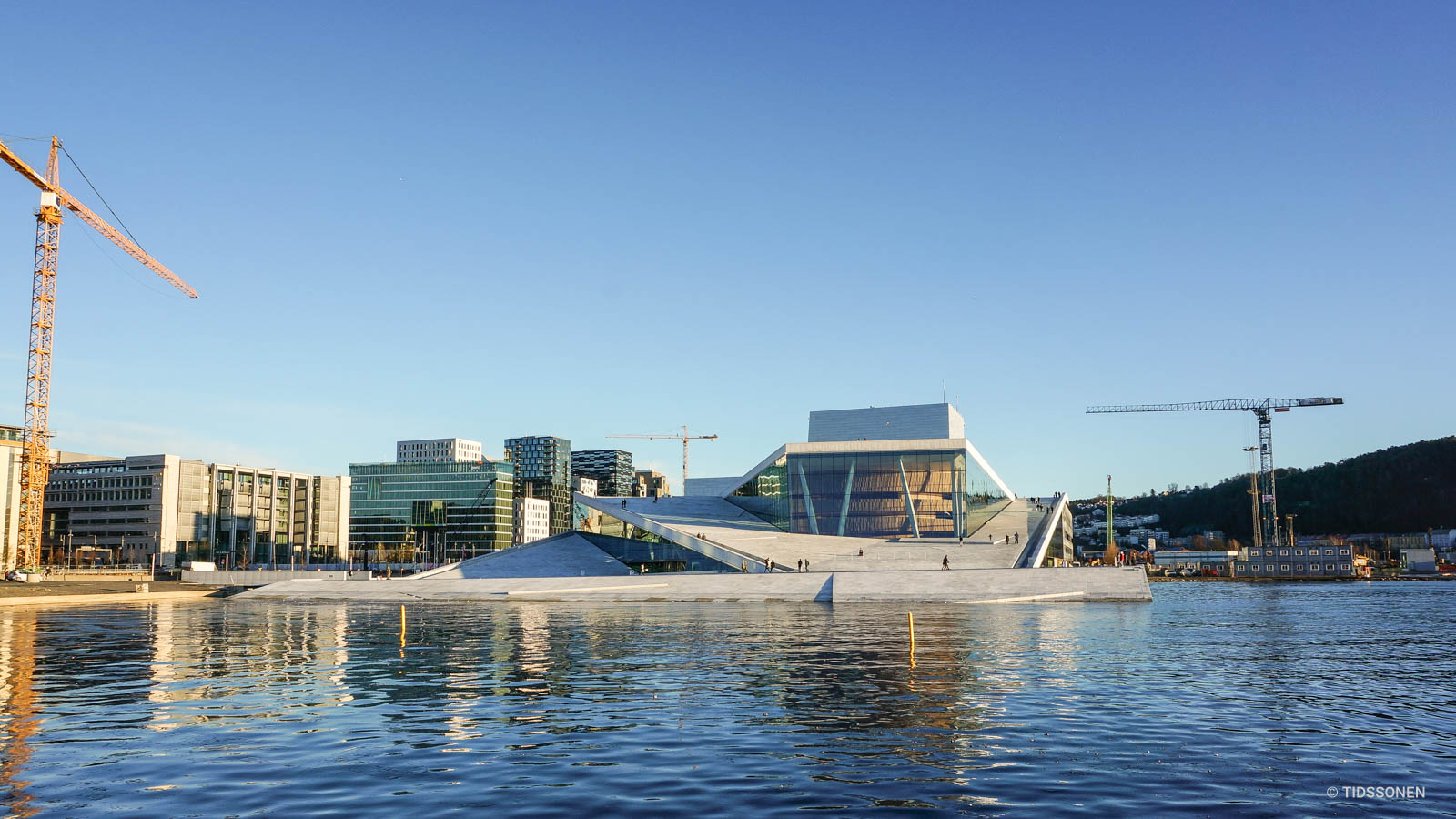 The Opera House was designed by the award winning architecture and design company Snøhetta, and was inaugurated in 2008. With a total area over over 38,500 m², it holds the title of being the largest cultural building constructed in Norway since the Nidaros Cathedral in Trondheim from the 1300s.

The structure has a flat iceberg-inspired shape, with lots of sharp and angular lines.The exterior is a contemporary mix of glass, Italian marble and granite. 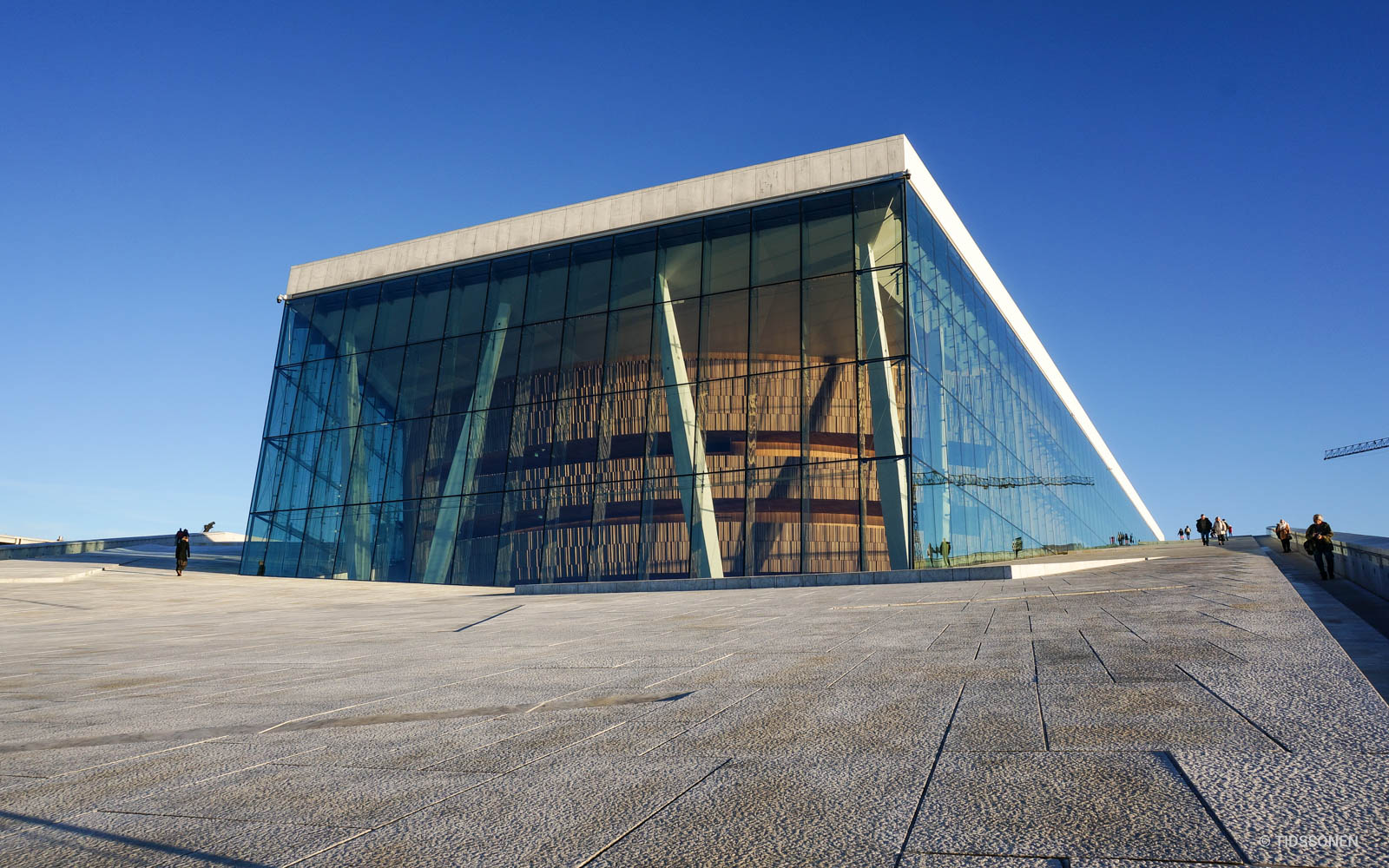 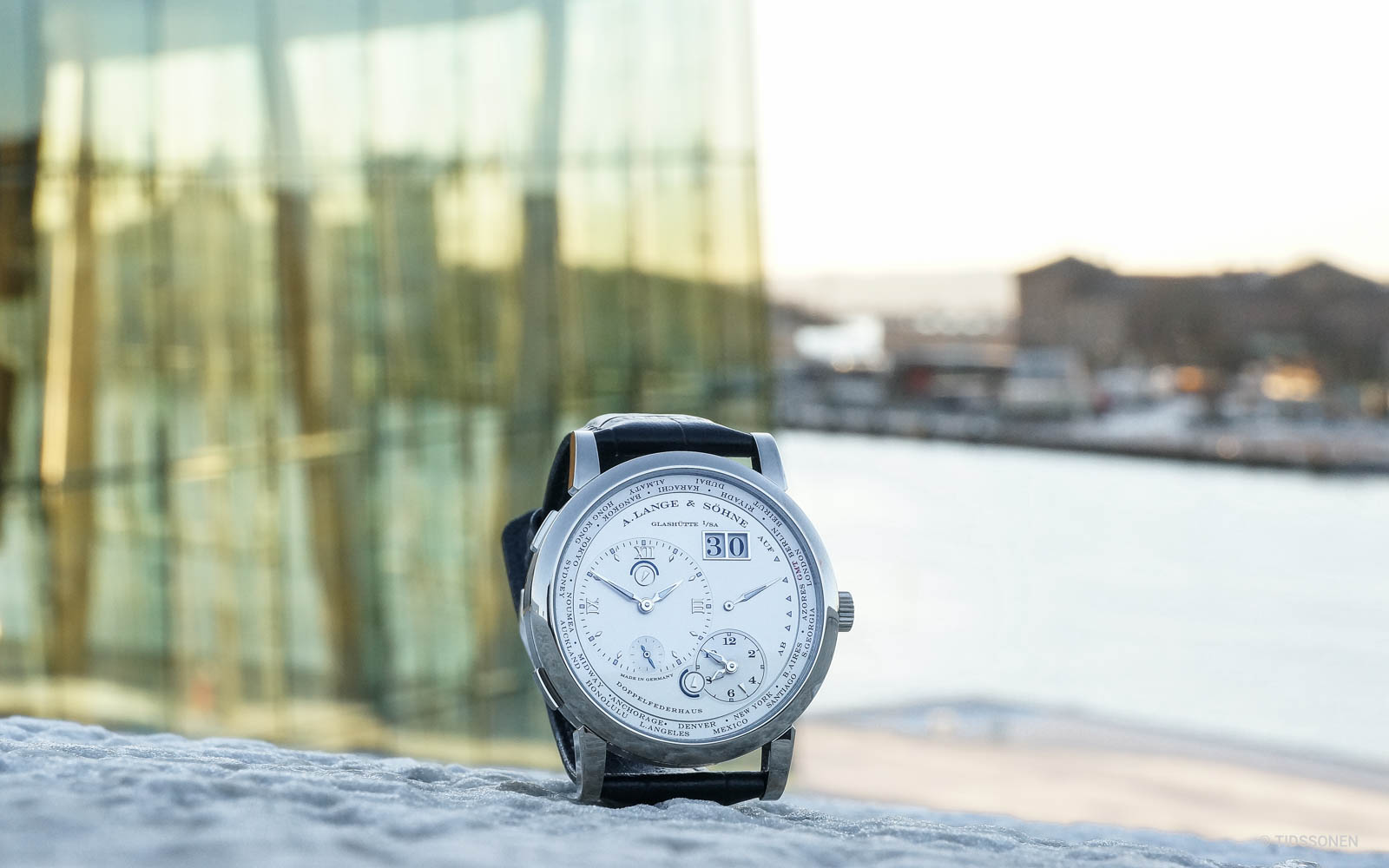 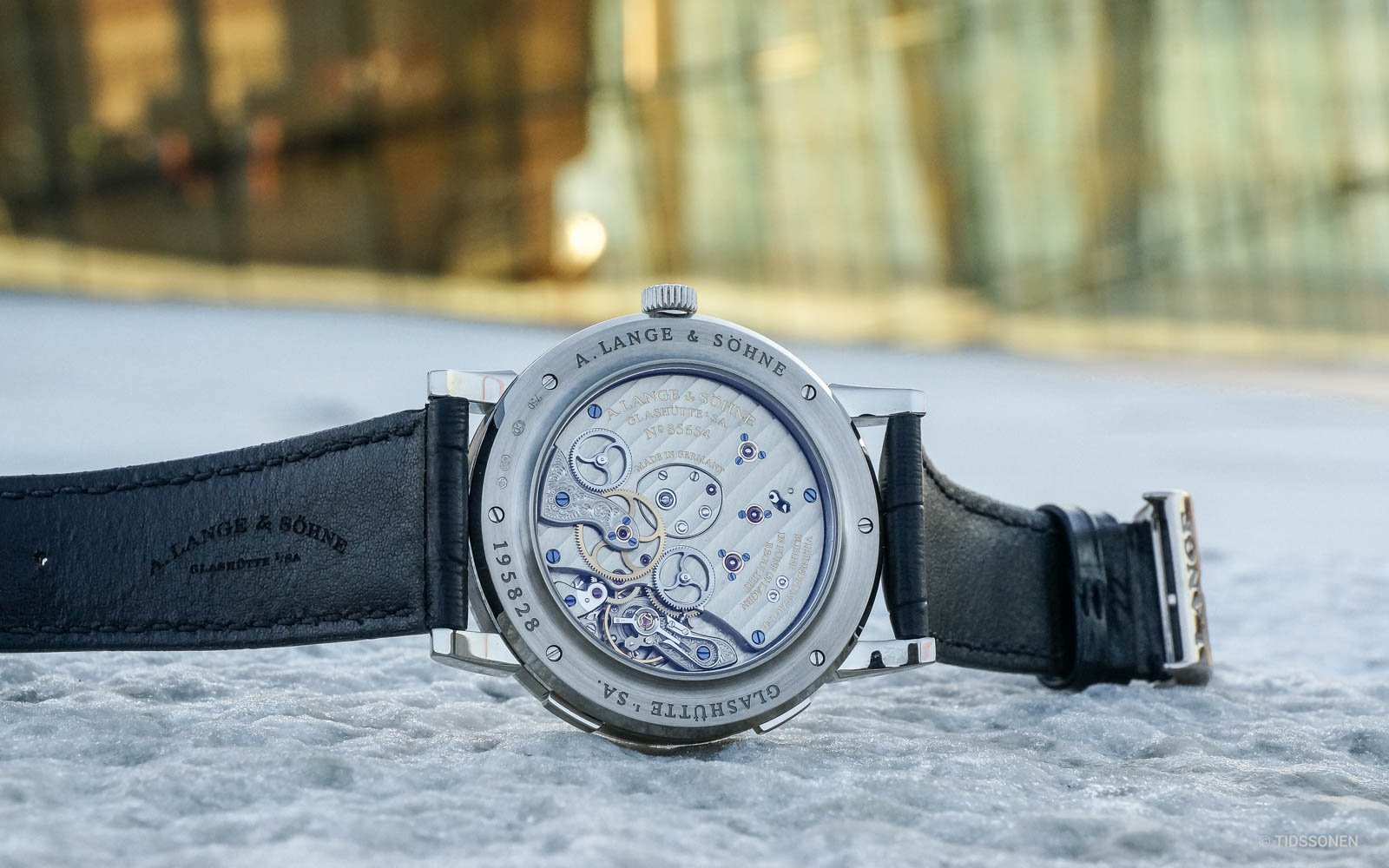 And it’s easy to see why the Opera House is such a popular location for tourists, as the roof area gives an excellent view over central Oslo.

Being late November, means that a lot of cafés and restaurants are already offering traditional Norwegian Christmas dishes of either ribbe (pork belly with crackling), pinnekjøtt (cured and steamed ribs of lamb) or the famous lutefisk (dried whitefish treated with lye). These dishes are almost to be considered staples during the weeks before Christmas, both for business lunches, and gatherings with friends and family.

If you are visiting Norway as a tourist, that would of course be the thing to try (at least once), but there is no lack of other exciting places to check out if you appreciate a nice meal. There has been a lot of progress in the Oslo culinary scene for the last 5 years or so, with internationally acclaimed restaurants such as Maaemo, holding two Michelin stars since 2012 for their nordic cuisine.

2012 was also the year Mathallen Oslo opened its doors on the former industrial area Vulkan, situated in the young and hip Grünerløkka district on Oslo’s East End. Mathallen (which literally translates to «The food hall») and the surrounding area, houses several exciting restaurants, bars, and gourmet specialty shops, with a lean towards ecological and local produce. Well worth a visit for anyone interested in what Norway has to offer food-wise. 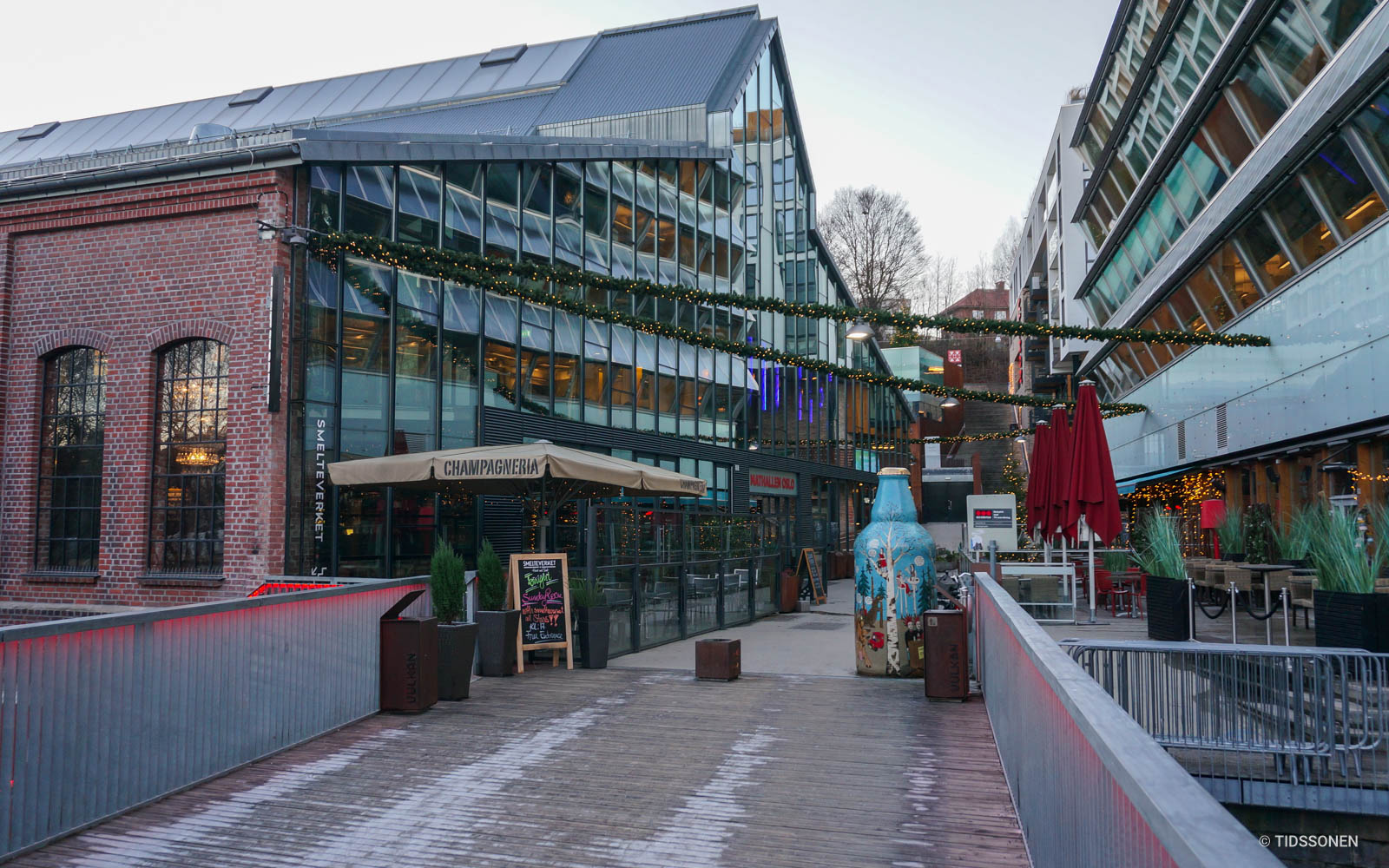 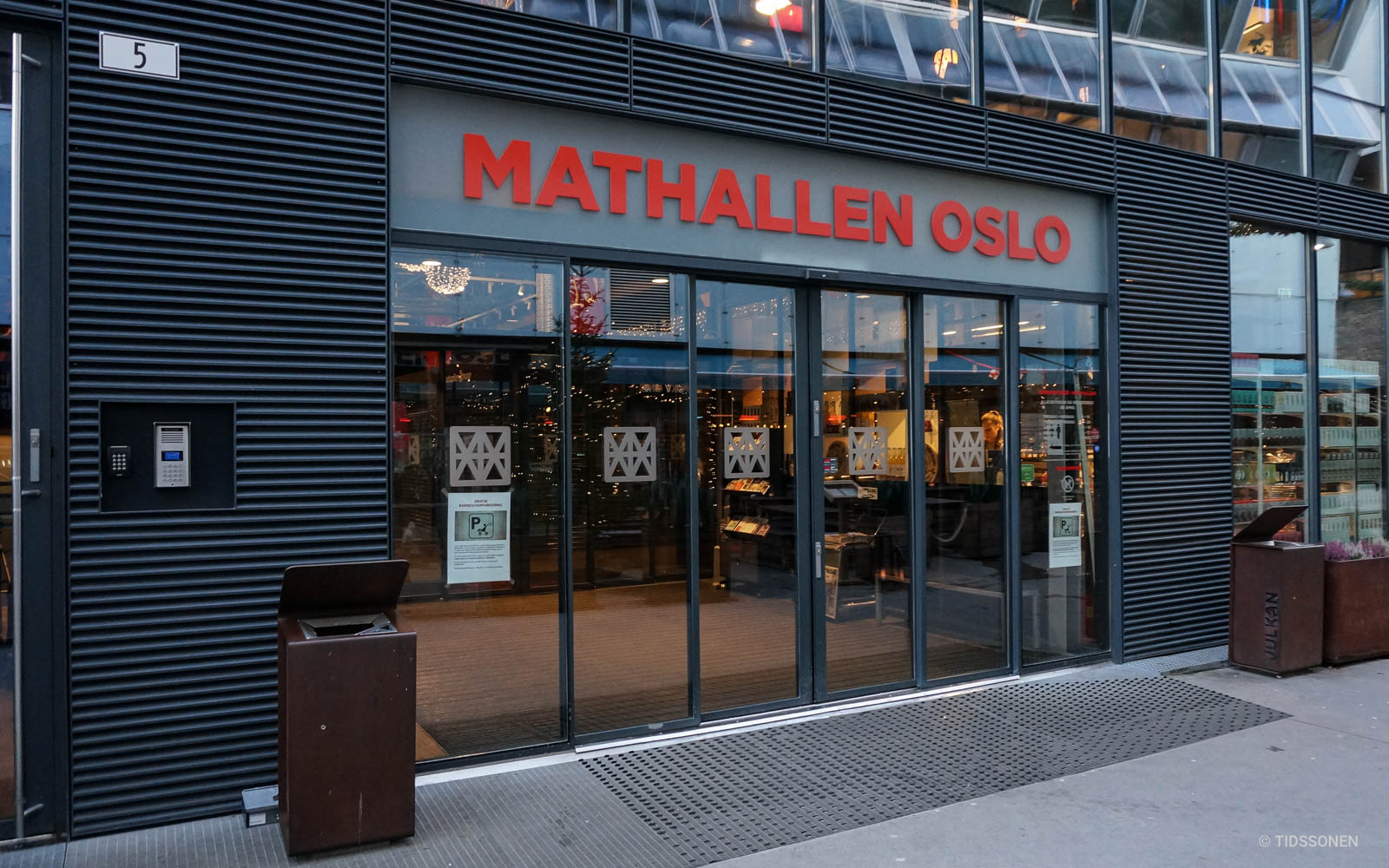 This time around, my pick was the American comfort food-inspired Lucky Bird restaurant – a place well-known to some Tidssonen forum members as a great GTG spot.

Before heading back home, I felt it was fitting to stop by Tidemann in downtown Oslo, who became the first Norwegian retailer of A. Lange & Söhne earlier this year.

On their wall, was also a great reminder of my favorite motto from the horological world: «There’s something one should expect not only of a watch, but also of one self: to never stand still».

Walking out from Tidemann in the darkness, I think I managed to stay true to Walter Lange’s  saying – at least for the day! 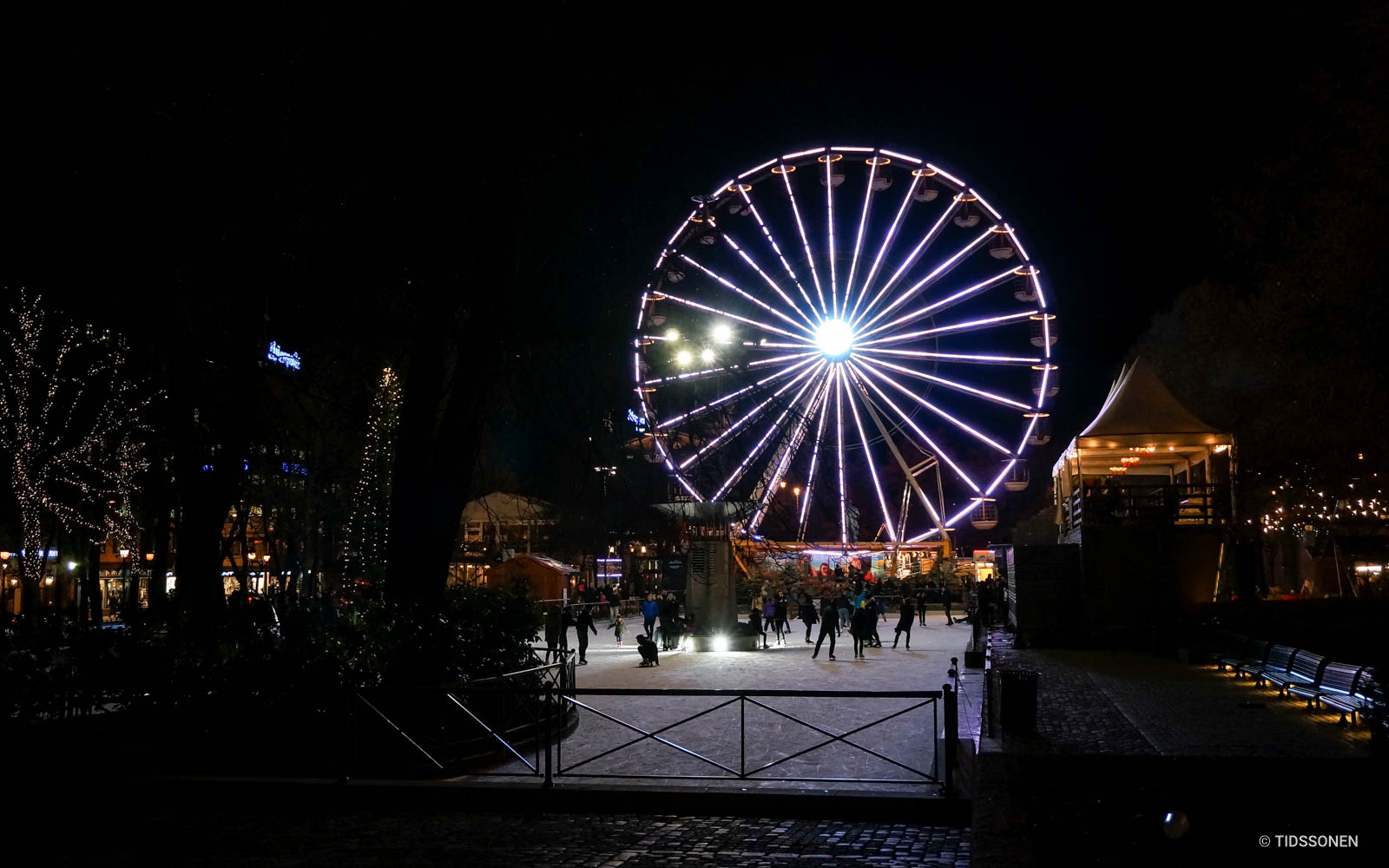 More information about my travel companion, the Lange 1 Timezone, is available on alange-soehne.com. 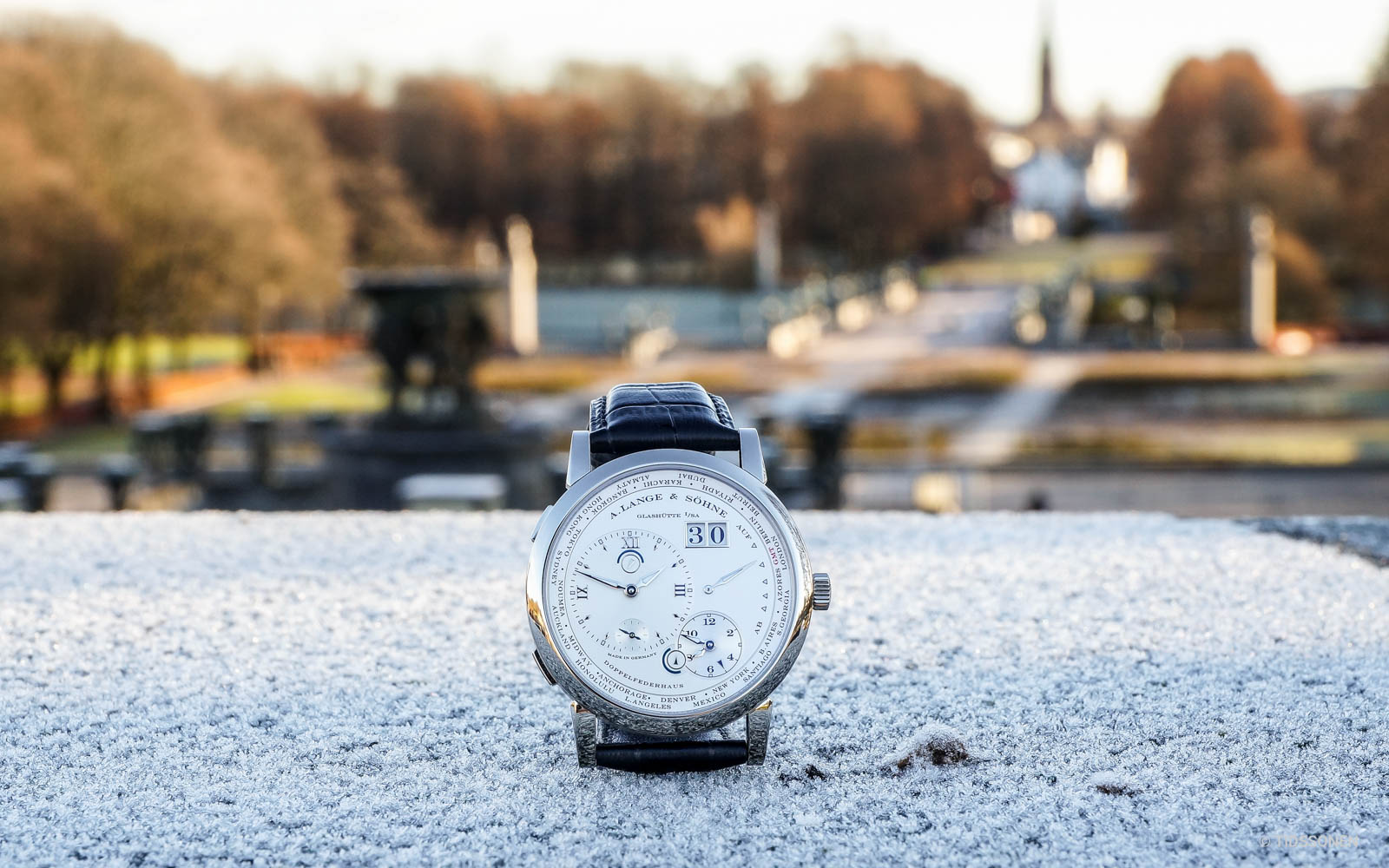 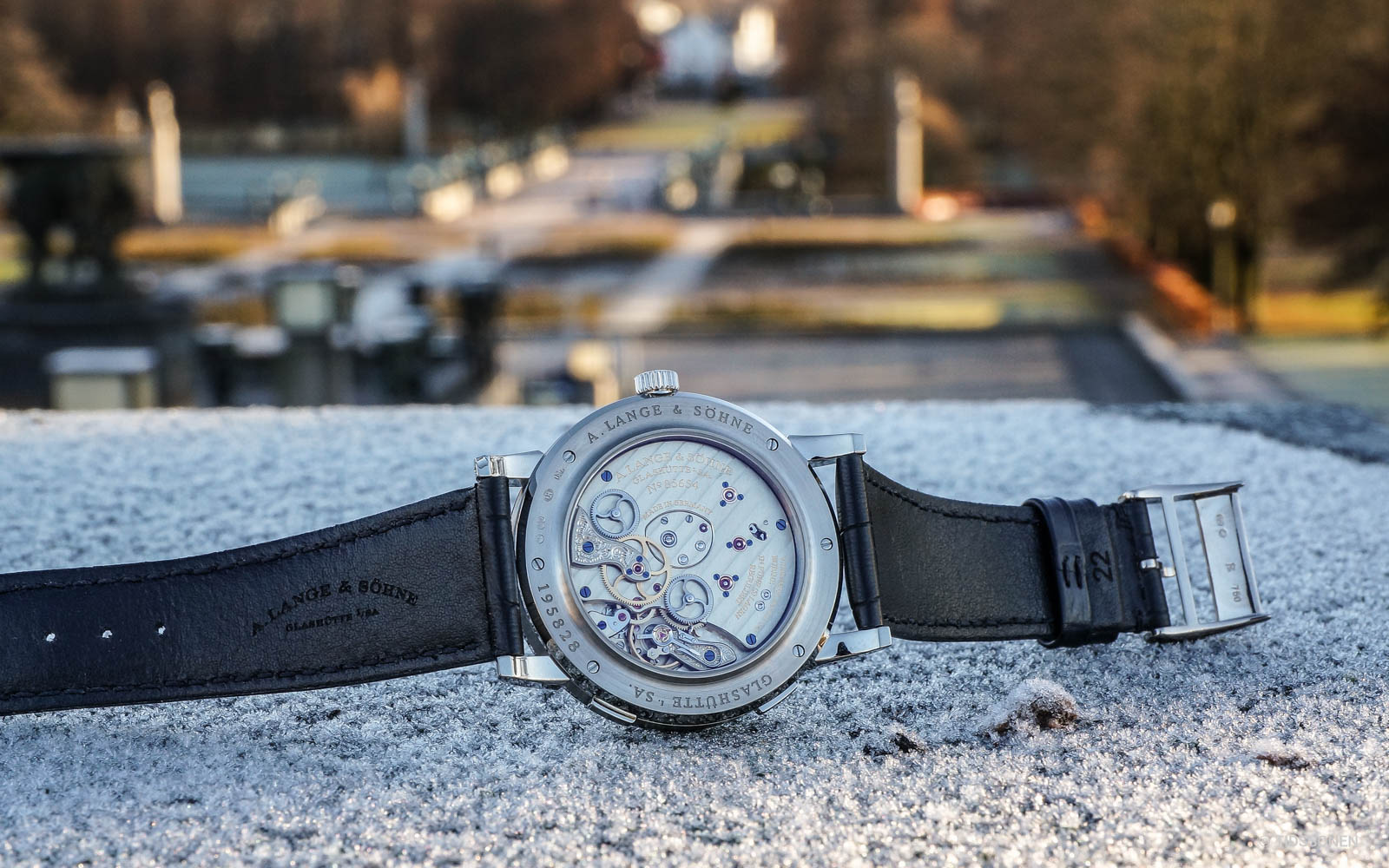