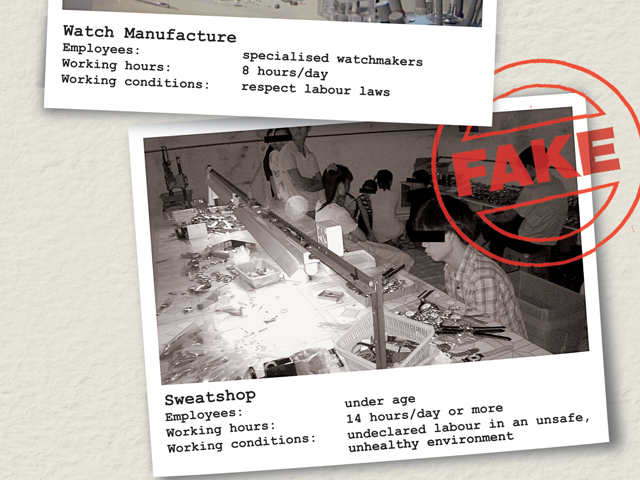 «As we gear up for summer travel, counterfeiters are rubbing their hands, confident that many tourists will return home proudly sporting the fake watch they could never otherwise have afforded. Provided, that is, they make it through Customs. Flirting with risk is a game they’re willing to play in exchange for what they see as their reward.

In reality, though, counterfeiting is anything but a game:

When an end customer buys a counterfeit watch, they become an accomplice to child labour, oney laundering, job losses and intellectual property theft, all of which benefit organised crime. As part of its mission, the Fondation de la Haute Horlogerie (FHH) has made the fight against fakes a priority objective by supporting action in the markets by fine watch brands. In 2009, the Foundation launched Fake Watches are for Fake People, a major public information campaign that appeared in 120 media in 24 countries. Now a new campaign is asking: Real/Fake: You have the choice! – Don’t be a partner in crime.

To extend the scope of its action, the FHH also launched a short-film competition for the general public and 1st year students in visual communication at Lausanne University of Art and Design (ECAL) on the theme, Take a true look at fakes. Out of all the entries, some thirty «infomercials» and short films – cartoons, fictions and montages – were selected to be shown in Switzerland and internationally.

When young people talk to other young people about counterfeiting, the message hits home!
Buying fakes is no longer a game… Don’t be partners in crime!» 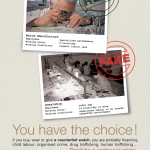